William Edouard Scott, painter, illustrator and muralist, was born in Indianapolis.  From 1904 to 1908, Scott’s studies began in the United States at the Art Institute of Chicago.  He relocated to Europe to continue at the Julian and Colarossi Academies in Paris. Scott’s studies culminated with his work under Henry Ossawa Tanner, teacher and mentor. Studying with Tanner, Scott created everyday life scenes.  His exploration of African-American subjects was a precursor to the Harlem Renaissance of the following decade.

Scott was twice awarded the Frederick Manus Grand Prize from the Art Institute of Chicago He received the Harmon Gold Medal in 1927.  In 1931, Scott won the Jesse Binga and the James McVeagh Prizes and became a Rosenwald Fellow.  This fellowship made it possible for Scott to visit Haiti later that year.

The visit to Haiti was life altering, fostering developments in his choice of subjects, uninhibited use of color and artistic style.  In his short stay in Haiti, Scott was able to capture the essence of everyday life and the images of ordinary people, producing over 140 works.  Sponsored by the Haitian government, an exhibit intended to show native artists was given to Indiana-born Scott as a solo exhibit because his works so represented Haitian life and culture.

Returning to the United States in 1932, Scott was in great demand, especially as a muralist.  Exhibits included the Royal Academy in London (1912), Johannesburg, South Africa, the San Diego Museum, Art Institute of Chicago (1932), Smithsonian Institute (1933), the New Jersey State Museum (1935), Texas Centennial (1936), the American Negro Exposition (1940), and Howard University (1946). His works are included in the collections of the National Archives, the New York Public Library, the Schomburg Center for Research in Black Culture Art Collection, the Government of Argentina, the Paris Salon and the Royal Academy in London.

Scott was one of the first African-Americans to attend the prestigious, restrictive Chicago Institute of Art and he was the first to graduate.  Highly acclaimed with worldwide recognition, Scott was a major personality of the cultural renaissance center in Chicago which rivaled and became a seedbed for the contemporaneous Harlem Renaissance. 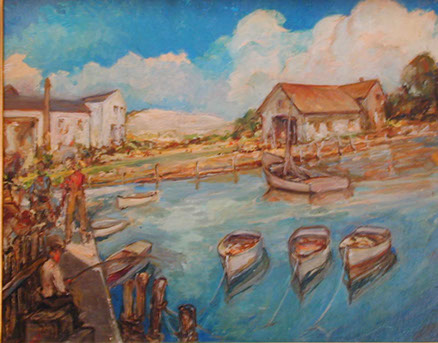